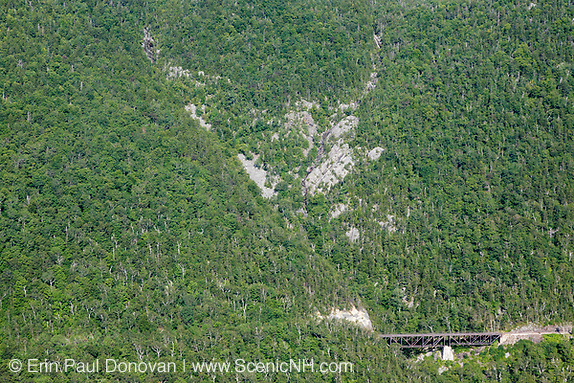 Willey Brook Trestle, World War 1 Guard Duty – Many know of the Willey Brook Trestle along the old Maine Central Railroad in Crawford Notch, but some of the history surrounding the bridge is not widely known. And to appreciate this article, a little railroad history is needed.

Chartered in 1867 as the Portland & Ogdensburg Railroad, reorganized as the Portland & Ogdensburg Railway in 1886 and then leased to the Maine Central Railroad in 1888 and later abandoned in 1983. Since 1995 the Conway Scenic Railroad, which provides passenger excursion trains, has been using the track. The building of this railroad through the rugged terrain of Crawford Notch was an amazing feat during the 1800s. Above is a photo showing the landscape of the Willey Brook drainage.