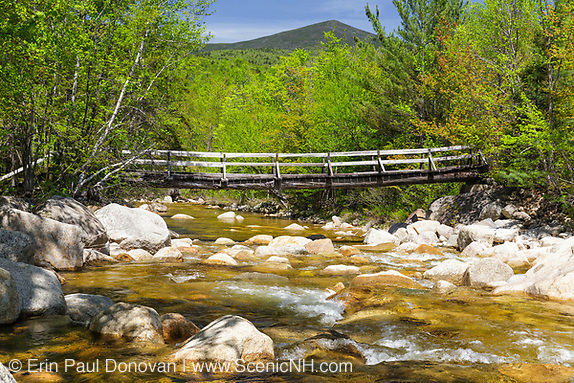 Thoreau Falls Trail, Proposed Bridge Removal – The final decision on the Thoreau Falls Trail Bridge project was made in September 2018. The bridge will be removed without replacement (Alternative 1). This is a win for wilderness conservation. Written in June 2015, the below article focuses on the bridge project.

In August of 2011, Tropical Storm Irene caused massive erosion damage to the White Mountains trail system in New Hampshire. Some trails were damaged so badly that they have been permanently closed (Flume Brook Trail in Waterville Valley has been decommissioned). And to this day trail crews are still repairing Irene damaged trails.

Deep in the 45,000-acre Pemigewasset Wilderness, at North Fork junction, along the Thoreau Falls Trail, a beloved bridge that crosses the East Branch of the Pemigewasset River was damaged during Tropical Storm Irene. The bridge is now listed to be dismantled on the Forest Services Schedule of Proposed Actions (SOPA). A final decision should haven been made by the end of 2015, but it now appears the decision won’t be made until 2018 (this is updated information).