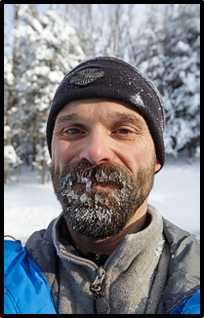 Over the years, New Hampshire native, photographer, Erin Paul Donovan has logged many miles on the New England trail system. However, in 2003 Erin Paul divorced himself from the process of ‘keeping track’ of his exploits. He finds his own satisfaction within the collective journey itself.

Despite his choice to discontinue with the principals of hiking lists, Erin Paul’s hiking history can still be colored with some details. He has hiked each of the New Hampshire 48 4,000 footers at least seven times (plus a winter and night series), and ascended Mount Washington, the tallest peak in the North Eastern United States, over 100 times. Erin Paul has also completed the New Hampshire 52 With a View, and Trailwrights (trail work needed). Given the astounding number of miles Erin Paul has traversed in his career, he agrees that it’s safe to say that he has completed the White Mountain Redlines.

Above are the hiking lists Erin Paul has unofficially completed over the years. He has never filled out any of the paperwork to make them official. And in 2003, he threw out all records of hikes. Most of these lists were completed prior to 2003.

As you explore ScenicNH Photography, keep in mind Erin Paul is a working conservation photographer who photographs the White Mountains environment. It has been many years since he last pursued any hiking list.