These projects are part of a long term documentary project that focuses on the abandoned villages, granite quarries, lost mountain settlements, and forgotten 19th century hill farming communities that are scattered throughout the New Hampshire White Mountains. Many of these communities were abandoned in the early 1900s. And today the cellar holes, graveyards, and stone walls that remain in the forest help tell the story of a long forgotten era. 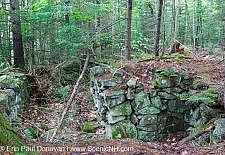 Sandwich Notch Hill Farming Community – The abandoned Sandwich Notch hill farming settlement is in the New Hampshire White Mountains. During the early nineteenth century, thirty to forty families lived in Sandwich Notch. A few Notch farms did strive, but the rocky terrain of Sandwich Notch was poor for farming, and it is no surprise that by 1860 only eight families remained in the Notch. Many families in the area left their farms and headed West to where farming was said to be better. By the turn of the twentieth century only one person, Moses Hall, lived in the Notch year around. Now a private residence the Hall Place is the only house left on the Notch Road. Today, the cellar holes, dug wells, and stone walls that once marked the fields of this forgotten ...
Read More 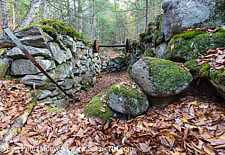 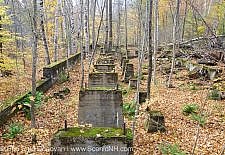 Back to projects page

• ScenicNH Photography is in the business of photography. We create awareness for historic preservation and environmental conservation.

• As you explore the historical sites in New Hampshire, keep in mind the removal of historic artifacts from federal lands is a violation of federal law.

• These historical sites are within the White Mountain National Forest; they cant’t be dug or disturbed, so metal detecting is out.

• This is a work in progress and is subject to errors and omissions.

• See more of our ongoing history work at the projects page.