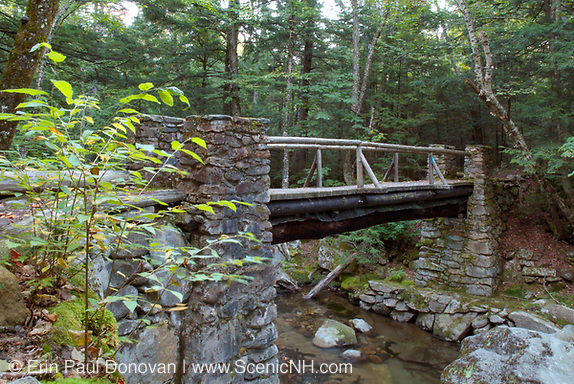 Cold Brook Cascades, White Mountains – Cold Brook begins in King Ravine in the township of Low and Burbank's Grant and empties into the Moose River in Randolph. The 1908 map of the Northern Peaks of the Great Range and their Vicinity by Louis F. Cutter shows eleven marked cascades on Cold Brook. In the present day, the 9th edition of Randolph Paths states there are ten cascades on this brook.

Because of the minor discrepancy on the number of cascades, I based my work on the 1908 Louis Cutter map, which surprisingly is very accurate. I also referred to old A.M.C. White Mountain guidebooks. Out of the eleven cascades on Cold Brook, five of them are named. Two are known, Cold Brook Fall and Mossy Fall and the other three, Secunda Cascade, Tertia Cascade and Quarta Cascade have been forgotten over time. 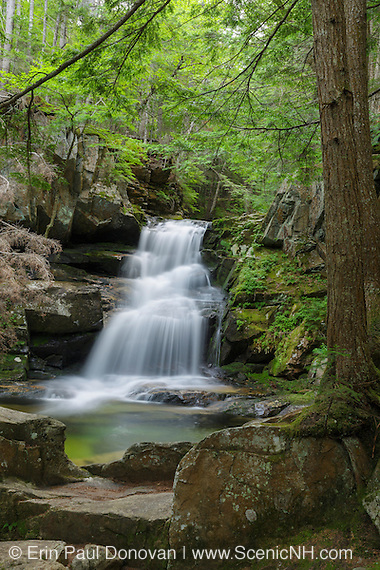 The first and easiest cascade to visit on Cold Brook is Cold Brook Fall (above). This cascade is located just above Memorial Bridge, near the junction of the Link and Amphibrach Trails. During the spring snowmelt and after rain storms it looks great. 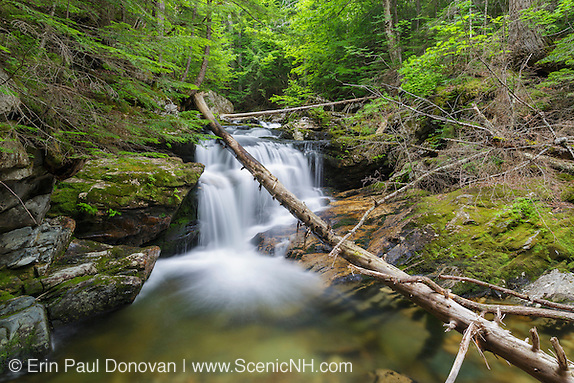 The second cascade on Cold Brook, Secunda Cascade (above), is located a short distance upstream from Cold Brook Fall. Other than the two named cascades on Cold Brook, Secunda is the only other cascade that is marked, but not named, on the Randolph Mountain Club’s 2016 map. There seems to be no mention of it in current guidebooks of the area.

Reference to Secunda and the next two cascades (Tertia and Quarta) can be found in the 1917, 1920 and 1922 editions of the A.M.C. White Mountain guide. Sometime between 1922-1940 reference to them stopped appearing in the A.M.C. guidebook. And Tertia and Quarta are marked and named on the 1908 Cutter map. 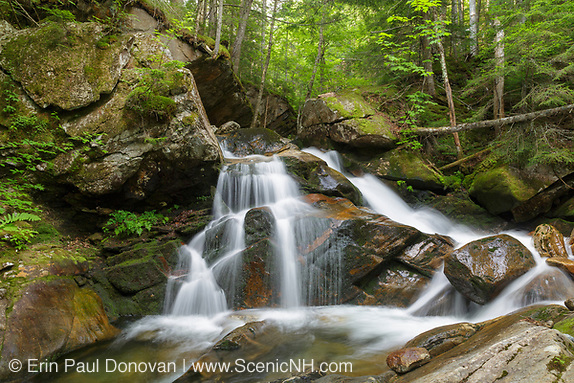 The third cascade on Cold Brook, Tertia Cascade, is the troubling one. The directions to Secunda, Tertia and Quarta Cascade in the old A.M.C. guides is nearly perfect. But the problem with Tertia is that the mileage puts me in the middle of a series of cascades. At this point, there is no way of knowing if the name was given to just one of the cascades (above) or all of them. I am leaning towards all of them, but that is only a guess. 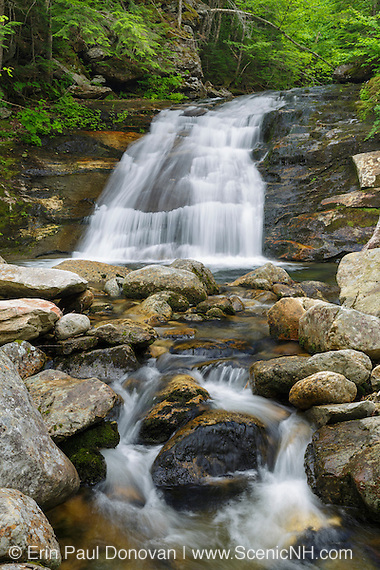 The fourth cascade on Cold Brook is Quarta Cascade (above). I can't believe that I have hiked the Amphibrach Trail for all these years, and never noticed this cascade. It is so close to the trail, but not that easy to reach. Out of the eleven cascades on Cold Brook, I find this one to be the most interesting. It is incredibly beautiful! 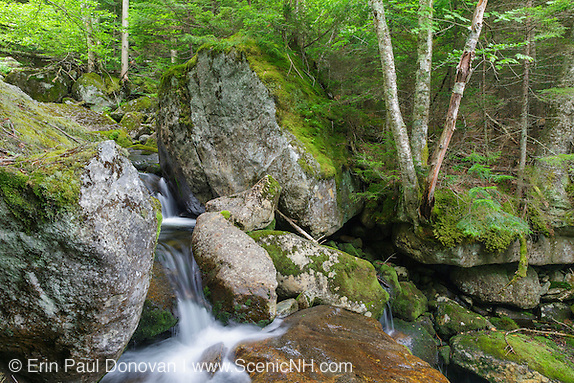 The fifth cascade on Cold Brook , Cascade #5, is just above the junction of Cold and Spur Brook. The top half of the cascade flows between two large boulders (above), and I found it to be more photogenic than the bottom half, which is just out of view in the above image. The bottom section was full of slick rocks, and moving around it with camera gear and a tripod was rather difficult. 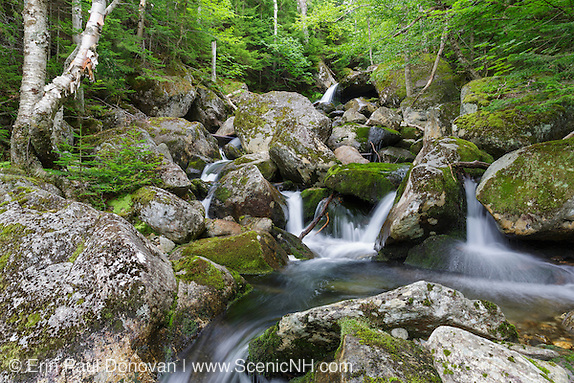 The sixth cascade on Cold Brook, Cascade #6, is located right above Cascade #5. It is located so close to #5 that I am not sure why these were considered separate cascades back in the early days. The 1908 Cutter map is very accurate though and it shows two cascades are located on Cold Brook in between where Spur Brook and an unnamed brook joins Cold Brook. The two above cascades that I am calling #5 and #6 are the only cascades that are in between the two landmarks I just mentioned. 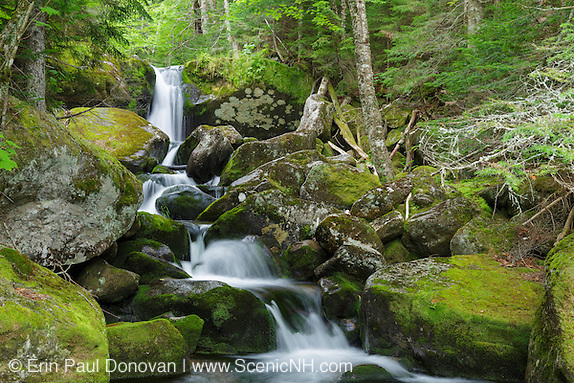 The seventh cascade on Cold Brook, Cascade #7, is the most remote cascade of the eleven. Its location is somewhat close to trails, but it is in an area that isn’t visited often. The cascade is not very big, but it is in the perfect setting. The boulders around the cascade are covered in green moss, and this makes for a great scene. 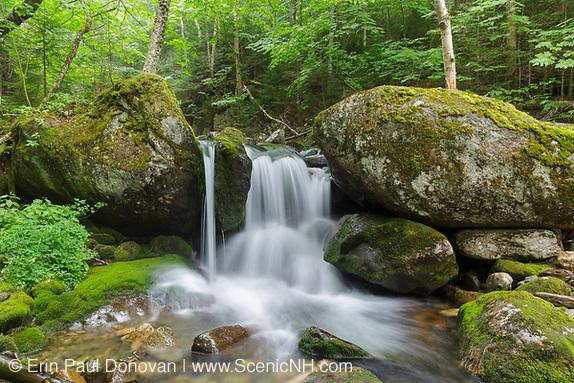 The eighth cascade on Cold Brook, Cascade #8, is located just above where the Miriam Sanders Bridge crosses Cold Brook along the Randolph Path. Cascade #8 looks to consist of a few smaller cascades and the most interesting section I could not reach. Above is the very top section of the cascade. 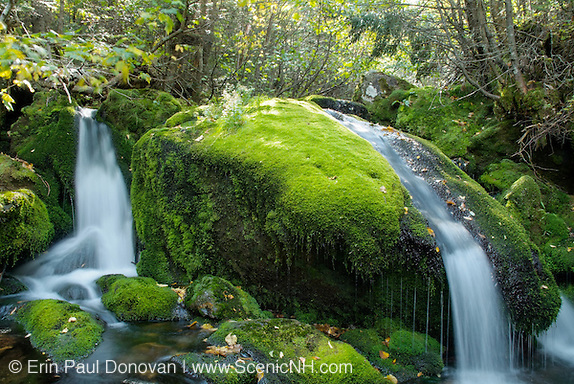 Unfortunately, I have run out of time documenting the Cold Brook drainage, and I have to move on to another drainage. So for now, Cascades #9 and #10 are missing from this article. When I get a chance to locate and photograph them, I will add them to this blog article.

We now jump to the eleventh and last cascade on Cold Brook that is listed on Cutter’s 1908 map, and this one has a name attached to it, Mossy Fall (above). Mossy Fall is located in King Ravine, and the King Ravine Trail passes by it. As the name suggests, the cascade is covered in mesmerizing green moss. Mossy Fall is nature in its finest form.

All of the above images can be licensed for publications by clicking on the image you are interested in. And you can view more images of Cold Brook here.