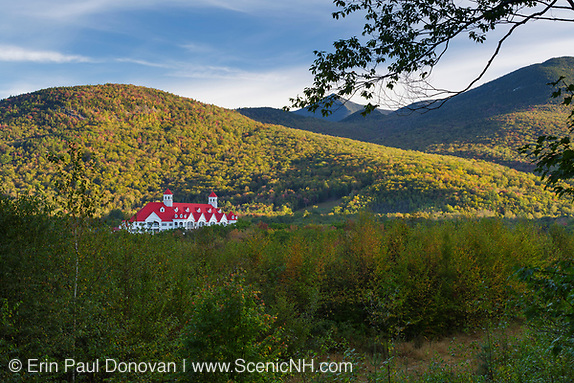 Forgotten Lincoln, New Hampshire – On January 31, 1764, Governor Benning Wentworth granted 24,000 acres of land to James Avery of Connecticut and others. Avery was also granted the town of Landaff on the same day. None of the grantees lived in Lincoln, and it is likely that they never visited the township. Lincoln was named after Henry Fiennes Pelham-Clinton, 2nd Duke of Newcastle, 9th Earl of Lincoln.

Per the charter, the grantees failed to settle the town in time. And in 1772 the Governor declared the Lincoln charter a forfeit and re-granted Lincoln, along with most of Franconia, to Sir Francis Bernard and others. The name of the new township was Morristown in honor of Corbin Morris, one of the grantees. 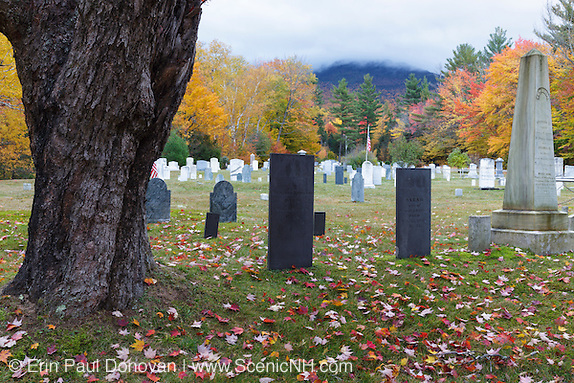 In 1782, Lincoln, known as Morristown at the time, was finally settled when Nathan Kinsman and his wife and others moved to Lincoln. They settled in an area known as Lincoln Gore. Lincoln Gore, which was part of the original Lincoln grant, was located on the western side of the Kinsman Range. The Morristown grant would eventually revert back to the original Lincoln and Franconia grants. Members of the Kinsman family are buried at Kinsman Cemetery (above) in Easton. 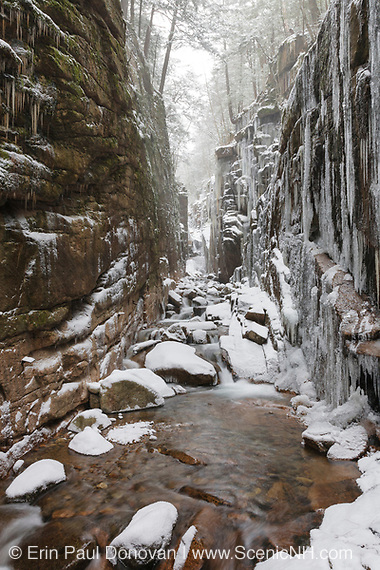 During the 1800s, tourism was growing, and hotels and taverns were being built to accommodate visitors to the area. The Flume Gorge (above) in Franconia Notch was accidentally discovered in 1808 by 93-year-old “Aunt” Jess Guernsey when she came upon it while fishing. There is some speculation about if she was the first to discover the Flume. Today, the Flume Gorge is a major tourist attraction. 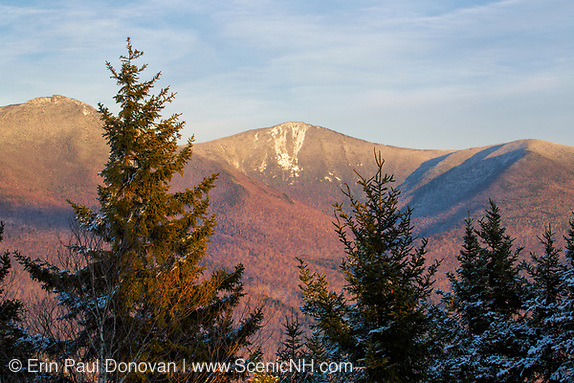 Farming was the main source of income throughout the 1800s, but the rocky and mountainous terrain created tough growing conditions. And during the mid-1800s, logging operations were taking over the area. The Fiske and Norcross Company, incorporated as the Merrimack River Lumber Company in April 1850, was cutting timber on land they owned in the Lincoln and Woodstock area. They did log drives down the Pemigewasset River to the Merrimack River, eventually ending in Lowell, MA where they had a mill. 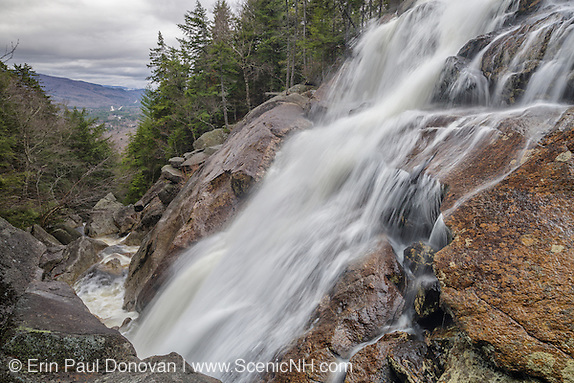 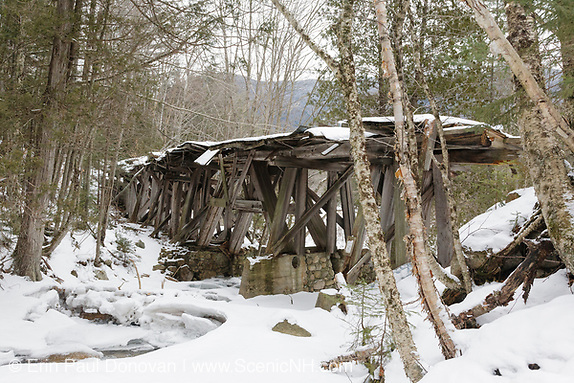 Lincoln was put on the map in 1892 when James Everell Henry moved his logging railroad operation from Zealand to Lincoln. Henry bought the area known today as Lincoln village and most of the East Branch of the Pemigewasset River Watershed; known then as Lincoln Woods. His East Branch & Lincoln Railroad lasted for 54 years, and his mill operations employed thousands of workers over its 70-plus years in existences. 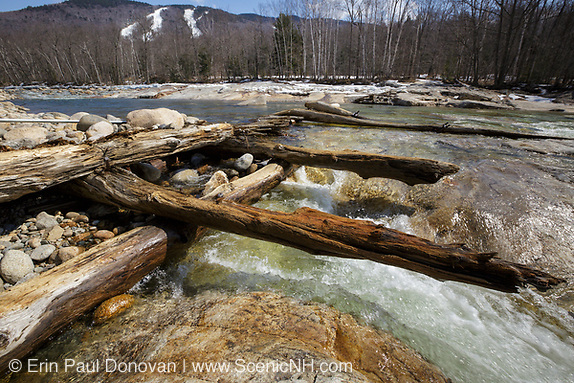 During the 1900s, there were at least four dams on the East Branch of the Pemigewasset River. These dams controlled water flow into the mill pond and generated electricity for the mill and town. All were damaged, from weather events, at one time or another. Above are the remnants of the old Crib Dam, also known as the Diversion Dam. This dam was used to control water flow into the mill pond. Most of these timbers were washed away and buried during Tropical Storm Irene in 2011. 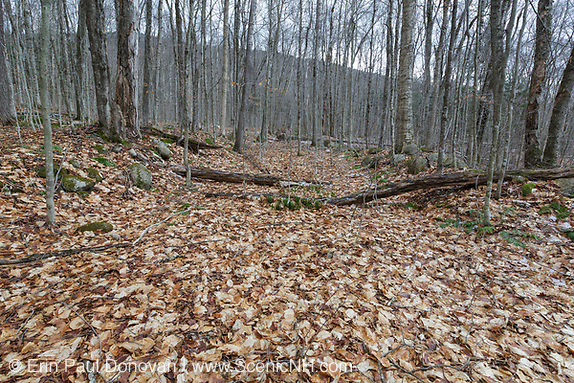 From 1907-1916, the Gordon Pond Railroad, owned by the Johnson Lumber Company (George Johnson) was in the towns of Lincoln and Woodstock. Johnson Lumber Company's first sawmill was located in North Lincoln. And the small settlement around the sawmill was known as “Johnson”. Today, little remains of the railroad in North Lincoln. Above is possibly the old railroad grade of the Hardwood Ridge Branch of the railroad. 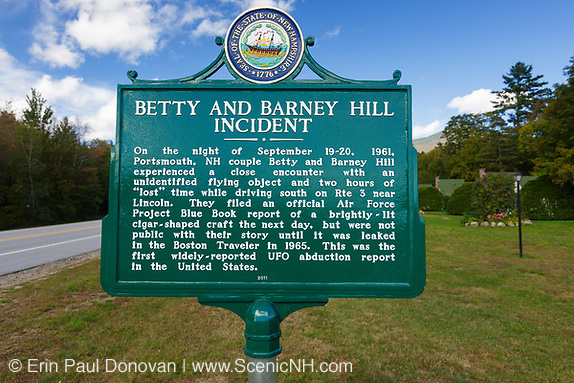 In September 1961, Betty and Barney Hill (above) had a close encounter with an unidentified flying object (UFO) while driving south on Route 3 near Lincoln. This was the first widely reported UFO abduction report in the Untied States. What makes this story interesting is the Lyndonville Air Force Radar Station in Vermont supposedly reported an unidentified flying object sighting just a few hours before the reported Barney and Betty Hill abduction. 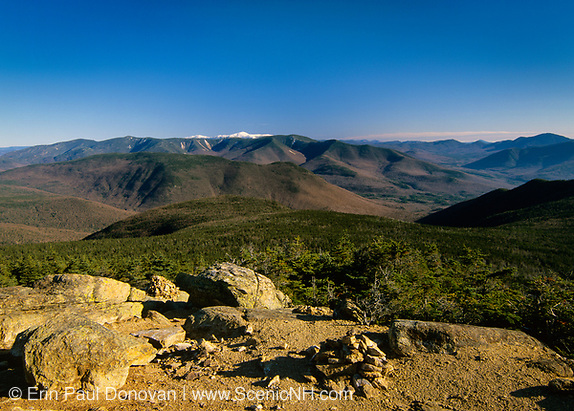 The above information only scratches the surface of the history surrounding this unique White Mountains town. To license any of the above images for usage in publications, click on the image. And you can view more photos of this New Hampshire town here.